Bible’s Christmas stories. I repeated this in a sermon – and was gifted a few days later with history’s first ever John the Baptist Christmas card.
The Bible seems to think we will never understand Jesus without getting past John the Baptist. John is born, it seems, a bit earlier than Jesus – but to hear the names John is to imagine a bellowing shout: “Repent!” I’ve always thought of John as rough, sort of a survivalist, unshaven, unkempt, wild-eyed, with a booming, raspy voice; consider the way is was played by Michael York in Jesus of Nazareth – intense, ferocious, rippling with condemnation and urgency.
But was he really so loud? What if his voice were more gentle, his invitation to “Repent!” more of a plaintive plea, the way a lover might urge his beloved, or a tender parent whispering to a sick child to try to get to sleep? The name “John” means something like Grace, or Mercy. What if this repentance movement isn’t a grim groveling in guilt, but a shedding of what has shackled us, leaving our two-bit life behind, and embracing the joy of fello 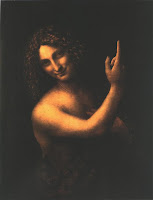 wship with God? I think of that funky, fun opening scene in Godspell, which you can’t watch without giggling, or feeling a bit envious.
DaVinci painted him as somewhat gentle but strong. Grünewald captured his essen

ce - as one who simply points to Jesus - and I like to think that a life goal might be to be that finger of John (as Karl Barth suggested), that my very being points to Christ.
I want to know more about John the Baptist. Two years ago I visited a cave, with the archaeologists who dug it up – and they believ 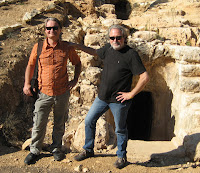 e this is where John got his start, preaching, washing people with water, anointing their feet with oil. Then he took his show on the road, down to the Jordan River, where Jesus finally came and was baptized.
I love the intriguing image in the Saint John’s Bible – depicting the moment when the baptism ha

s just ended, John is walking away, and evil awaits the shimmering Jesus coming up out of the water. Historians and archaeologists are helping us learn more and more about John.
More importantly, I want to know John, not just about John – and I want to know the One he knew. John deferred to Jesus; John touched him; John knew him; John worshipped him; John wanted to decrease so Christ might increase. John knew you had to "prepare the way of the Lord," to clean house, get rid of the clutter - and then, and only then, is there room for Christ to come.
If I can get close to John, I might repent – not being hollered at, but feeling the love of being invited into a better life, to let that old scaly skin of my cold lif e molt away, and become a new creature, a serious follower of Christ, not straddling two worlds, clinging to my old ways, the ways the world thinks are cool and comfy, but abandoning ego, pride, pleasure, rushing out after Christ before he gets away, not noticing the door slamming behind me, getting as close to him as possible, and always – and I suspect then, and only then, will I feel the joy, and really discover the coming of Christ this Christmas. DaVinci did picture the baby Jesus quite clearly in the company of John the Baptist...
Posted by James C. Howell at 11:02 AM

James C. Howell
I’m pastor of Myers Park United Methodist Church in Charlotte, NC, and I also teach preaching and ministry at Duke Divinity School as an adjunct. I write regular inspirational/ educational pieces you’ll find here, reviews of books pertinent to faith today and ministry, and I love to be part of conversations about life with God and in the world among Christians and clergy.