October 4 is the feast day of St. Francis – not his birthday, but the date of his death; for the faithful, it is the end of life, its consummation, and reaching its final destination, that matters. I am unsure what to say in such short space about Francis. For me, Francis has been a deeply personal journey, from my first visit to Assisi, through times I have taken family and groups there, to daily thought and prayer, icons of him hanging in my home and office… I wrote a book about Francis and my interactions with him… and when people ask me What is your favorite among the books you’ve written? I’m inclined to pick this one.

Recently I received a handwritten note from Murray Bodo, a

priest and wonderful author who has shaped my thinking about Francis. In one of his lovely books, he pinpointed why Francis matters to me: “Francis dares to live the Gospel the way I would like to live it, and he loves Jesus the way anyone would like to be loved… It is easier to rationalize and dismiss Jesus than Francis, because Jesus, after all, is divine and so far above us. But Francis is only human like us. What he is, we can become… What is so unique about Francis is that he does what we would like to do, and he does it in such a simple, ingenuous way that we know we could do the same if only we would.”

sn’t an ordained minister! and he could just barely read and write. We do not need to be Francis; but we do need to be the person God calls us to be. Another intriguing writer about Francis is Gerard Straub, a former soap opera producer! He thought about the saint’s last words: “Francis said, ‘I have done what was mine to do; may Christ teach you what you are to do.’ Do not seek to follow in the footsteps of the men of old; seek what they sought.”

Francis sought God, with an intensity and constancy that might be instructive. After being seriously wounded as a soldier, he was t

rying to piece his life back together; every day, at length, he knelt before a crucifix in a little broken down church and prayed these words, over and over: O most high, glorious God, Enlighten the darkness of my heart, and give me a correct faith, certain hope, and perfect charity, wisdom and perception, that I may do, O Lord, Your most true and holy will. I made this the centerpiece of my book on The Will of God.

For Francis, knowing the will of God became almost embarrassingly obvious, and simple: he listened to the Bible being read, carried a copy of the Gospels around with him, and thought he was supposed to do whatever it said. Jesus said “Give all you have to the poor,” and instead of rationalizing or being puzzled, Francis just went out and gave what he had to the poor. Francis “took the Bible literally,” not in the sense of arguing about historical accuracy, but taking its words as his to-do list for the day. gly, Francis’s father, Pietro Bernardone, who had huge ambitions for his son, was chagrined, and infuriated. Francis was squandering a career in the cloth merchant business, and giving away precious family possessions! So, in a famous scene, Pietro sued his son Francis, who returned even the very clothes off his back, with the courageous, tragic yet faithful words, “No longer do I call Pietro ‘my father,’ but from now on I will only speak of ‘our Father in heaven.” Jesus had said his presence would divide families, and Francis knew that pain – as did his father. I think my best thoughts in Conversations with St. Francis are my guesses about how this felt to father and son.

Francis had been sent on a mission by the God he’d prayed to repeatedly. After seeking God’s will, Jesus spoke to Francis and said “Go, rebuild my church, for as you can see, it is falling into ruin.” Francis thought Jesus meant the very building in which he was kneeling; so he used masonry skills he’d learned as an aspiring knight and repaired it! But it was the Church, all of it, which had become listless, pompous, and frankly too rich, that Francis was to rebuild. 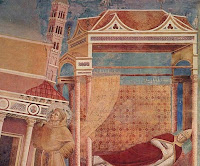 never a critic of the Church: Francis loved the Church, and would not act with the approval of the bishop, and the pope. He visited Rome, and at first the pope refused to see such a poor, dirty little man. But he had a dream that the great Lateran basilica was falling to the ground, propped up only by a poor, dirty little man. So he summoned Francis back to the basilica and blessed his work.

Statues of Francis are often placed in gardens. He was a lover of nature – but for t

he same reason he was a great lover of people: whatever God made, he treasured. One of the witty quotes from G.K. Chesterton’s eloquent book on Francis is this: “Francis seemed to have liked everybody, but especially those other people disliked him for liking. Francis had all his life a great liking for people who had been put hopelessly in the wrong.” Indeed, Francis saw the creative work of God in every person, and in flowers, birds, fish, trees, and rocks; he slept out of doors, even on hard stones, partly to experience the discomforts Jesus must have known, and partly to be as close as possible to what God had made.

Because of this, Francis was history’s greatest peacemaker, and may have a few things to teach us about the tensions in our world. Francis lived during the violent decades of the Crusades, when Christian armies battled Muslim 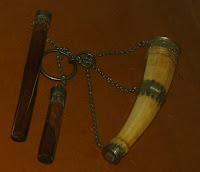 armies. Francis wanted to meet the sultan, so he marched off with the Crusading armies, and trudged out, unarmed, to the camp of the Muslims – who started to kill him, but as he was unarmed and so different from other Christians they had ever seen, they took him to the sultan. For several days they conversed, and became friends; o

ne version of the story says the sultan was prepared to convert! He gave Francis a horn made from an elephant tusk, used to call warriors to battle; Francis brought it home and used it to call his friends to prayer. A new book I just finished reading explores this whole episode, and what it might mean for how we could conceivably rethink political hostility in today’s world. Other stories from Francis’s life, such as the charming “wolf of Gubbio” incident, boggle our minds, and show us a better way.

Francis’s health was never good after his war injuries. Nearly blind, and having endured brutal surgeries, suffering malaria and other maladies, in the thick of misery, Francis wrote some of the most beautiful poetry praising God ever conceived. He also became even more determined, late in life, to be like Christ. Devoted all his life to crucifixes and the beauty of Christ’ 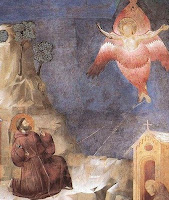 s love for us on the cross, Francis began to pray,

My Lord Jesus Christ, two graces I ask of you before I die: the first is that in my life I may feel, in my soul and body, as far as possible, that sorrow which you, tender Jesus, underwent in the hour of your most bitter passion; the second is that I may feel in my heart, as far as possible, the abundance of love with which you, son of God, were inflamed, so as willingly to undergo such a great passion for us sinners.

On a mountain northwest of Assisi, Francis experienced a painful but wonderful encounter with God, and came away with wounds in his hands, feet and side – which bled intermittently, and which he hid out of humility. Since Francis, history has witnessed many “stigmatics,” people who have had such wounds appear spontaneously on their bodies out of their devotion to Christ.

Ironically, and sadly in a way, Francis was buried in a splendid basilica he would not have wanted built. The beautiful basilica houses his body and those of his closest friends, and features stunning frescoes depicting dramatic moments in the saint’s life. Henri Nouwen once reflected on the many challenges facing Christians in today’s world, and asked “Who will be the St. Francis of our day?”
Posted by James C. Howell at 7:10 AM

James C. Howell
I’m pastor of Myers Park United Methodist Church in Charlotte, NC, and I also teach preaching and ministry at Duke Divinity School as an adjunct. I write regular inspirational/ educational pieces you’ll find here, reviews of books pertinent to faith today and ministry, and I love to be part of conversations about life with God and in the world among Christians and clergy.